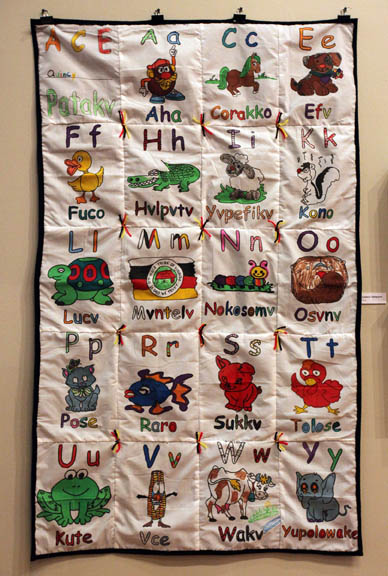 The endangered native language of Brighton residents will get a reprieve from extinction when the first Creek language dictionary is printed in book form early next year.

Tribal Council recently approved an agreement with University Press of Florida to publish “Este Semvnolvlke Enponakv, The Language of the Seminole People: An Outline Grammar and Basic Dictionary of the Florida Seminole Creek.”

The project, founded by Brighton Cultural Programs director Lorene Gopher, is nearly 20 years in the making.

“I went to a culture workshop in the early 1990s and realized that our people were losing the language. We still had it, but there was no way to maintain it,” Gopher said. “If we don’t do what we can to preserve our language, then when it’s gone, it will be totally gone.”

Gopher, Jenny Shore and world-renowned linguist Julian Granberry began a campaign to list, define and phonetically express Creek words that for centuries had been passed orally. The language is named for those whose ancestral bloodlines hail from lands near watery passages in regions that became Georgia and Alabama.

Paul Backhouse, director of the Tribal Historic Preservation Office and Ah-Tah-Thi-Ki Museum, said language is the “heartbeat of the culture; the central thing that makes a culture. When it disappears, so does the way of thinking – the very pattern of thought.”

According to a 2010 report from the United Nations Educational, Scientific and Cultural Organization, only about 175 of the original 300 reported Native American languages still exist. Five of the top 25 most endangered languages of the world are Native American.

Backhouse, who is serving as publication coordinator, said early translations of Creek to English were problematic because they were made by colonizing and missionary English who recorded what they thought the Creeks were communicating. In the case of the Creek dictionary, words were presented to language-fluent elders and then fit to English.

Many new words, such as “computer” and “astronaut,” had not yet evolved to 21st century Creek vocabulary, so they were created by elders for succinct and final translation. New words include czto soponakv for “television,” which literally means “metal to talk with,” and estzketz for “airplane,” which literally translates to “something to fly with.”

Lewis Gopher, tribalwide cultural events specialist and head of culture education at Brighton, said only about 20 elders speak Creek fluently. But there is hope, he said, adding that the language is part of Brighton’s Pemayetv Emahakv Charter School curriculum, which makes the dictionary a vital classroom component.

“It’s entirely needed. On a personal basis alone, I will be able to learn on my own and my kids will have a book in school,” said Lewis Gopher, the son of Lorene Gopher.

About 3,000 words are ready for the dictionary, which will list words from Creek to English and from English to Creek.

Backhouse said the completed manuscript is to be delivered to the publisher Sept. 1.

Royalties will be paid to the Tribe for use by the Tribe.

But the dictionary comes with some controversy, Lewis Gopher said. Tradition holds that language is provided by the Creator, the Breath Giver, and not meant to be written on paper or available to the world. To do so could bring harm.

“Now here we are, ready to be published and my mother is sick and aware of the consequence. What a sacrifice she made to preserve our identity that goes much deeper than modern buildings or the Red Barn,” Lewis Gopher said. “The depth of her work will go on to the next century.”