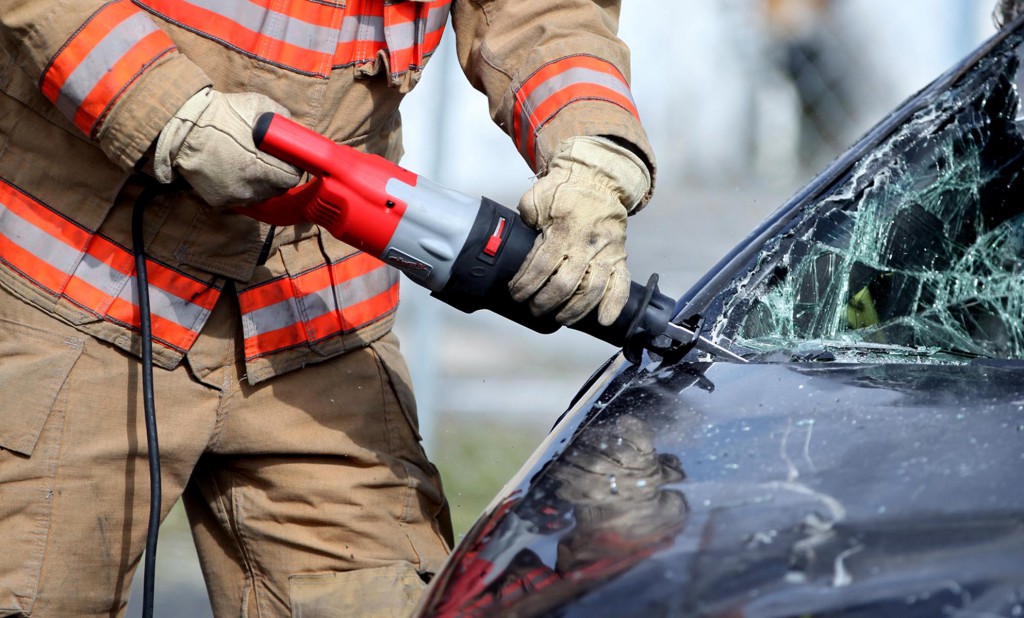 “Thanks to the manager, Ian Tyson, the show happened on a Saturday and we had access to the vehicles on that Monday,” said Doug LeValley, District Fire Chief of Hollywood.

Eleven crashed cars dragged to the attraction’s parking lot gave 40 firefighters a chance to practice using a battery of hydraulic tools and hand tools to cut through thick, mangled metal that, in many real life situations, stands between the life and death of a car crash victim.

LeValley said Battalion Commander Robert Curtis had the forethought to ask Tyson if he would allow the department to use the trashed cars. Four shifts of firefighters turned out for four days to practice using the Jaws of

Life, other tools, tactics and strategies to cut through the metal and pull the victim to safety.

The process, called extrication, begins by circling the car to see if a person was ejected. Then, eye contact is made with the victim and support is provided to the patient’s head while the car is stabilized using cribbing tools in the undercarriage.

As with actual accidents, the department’s Incident Command System (ICS) was followed during the training exercise. ICS assures that a safety officer commands and controls the scene to ensure the safety of all personnel.

“Next we figure out the best way to get the victim out. Sometimes we can pop a door but sometimes we have to take the whole roof off. On the rare occasion, we have a ‘dash roll,’ when we remove the entire dashboard, including the steering wheel, up and away from the patient,” LeValley said.

All the techniques were practiced during the exercise.

“Our personnel have already been through the formal training and are certified in extrication, but opportunities like this enhances and hones their skills,” LeValley said. “It builds camaraderie and good team work for when lives really do hang in the balance.”