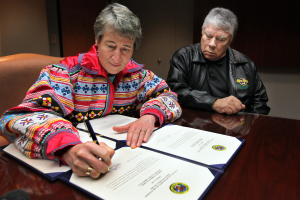 HOLLYWOOD — The Seminole Tribe of Florida on Jan. 8 became the 15th of 566 federally recognized Tribes to be approved by the U.S. Department of the Interior for increased autonomy over tribal leasing agreements on trust lands.

During a signing ceremony at Tribal Headquarters in Hollywood, before Chairman James E. Billie and other Tribal leaders, Secretary of the Interior Sally Jewell formally accepted the Tribe’s own lawful regulations that govern leasing agreements and promote economic growth.

In effect, the move significantly simplifies the U.S. government’s involvement in Seminole Tribe of Florida commercial, residential and land investment development while bolstering the Tribe’s independence.

Read the full story in the January issue of The Seminole Tribune.