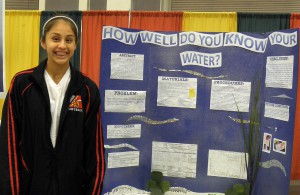 “It was a very fun learning experience,” said Dasani Cypress, a seventh-grader at Ahfachkee School.

In December 2012, Cypress’ How Well Do You Know Your Water science project won first place at Ahfachkee, which led her to the NAISEF fair and convention held March 21-23 in Albuquerque, N.M. There, she blew away judges to take first place in the national environmental sciences category of the contest.

Patricia Jolly, an instructional aide at Ahfachkee, accompanied Cypress on the trip. Students Janessa Jones and Sabré Billie also attended to enter their Afhachkee first-place projects from December, though neither placed at NAISEF.

“Both Janessa and Sabré showed well. It was a good experience for everyone. They enjoyed the trip,” Jolly said.

Cypress’ project took about a month of research and follow-up to determine the quality of water that flows through Big Cypress and the impact the water’s natural filtering system has on the community. She credits Lisa Meday, Whitney Sapienza, Christopher Fuller and Craig Tepper, of the Tribe’s Environmental Resource Management Department, for help that included sharing data already at hand and analyzing Cypress’ own collected water samples.

“Not a lot of people are aware that Big Cypress is a big part of our water filtering system,” Cypress said.

At the core of the project, Cypress set out to discover if water coming into the reservation was cleaner or dirtier than water going out. She was concerned about the effects of water runoff from cities and agricultural land beyond Big Cypress.

“It’s the minerals that collect that worry me. Too much can kill plants and fish,” she said in December during an interview at the Herman L. Osceola Gymnasium where the school’s science fair was staged.

Cypress hopes to continue the project.

On April 3, Meday sent an email to Cypress’ mother, Danielle Jumper-Frye, indicating that the department will continue its own job of gathering data to monitor the water quality. They will share their findings with Cypress.

Meday also invited Cypress to tag along with the department in July and August during aquatic diversity studies in Big Cypress and Brighton. The study will link biological (fish, bugs, algae, etc.) findings to water quality.

Cypress is all for it.

“I would like to continue my project, to learn more about our water quality, to see if it is improving and to take the project to another level,” she said.