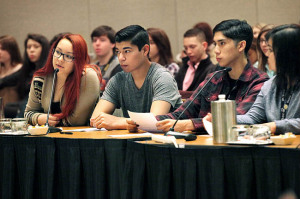 WASHINGTON — Bundled under layers of sweaters, hats and gloves, teenagers from Tribes throughout the eastern and southern United States braved teeth-chattering temperatures in Washington, D.C. for intense study in the cradle of American democracy.

“I really enjoy learning about history, government and how it affects us as Native Americans. We learn from the past and we plan what we want to do for the future and how we can help,” said Dakota Daigle, a high school senior from the Coushatta Tribe in Louisiana.

Sixty-seven Native students participated in an education-packed adventure Feb. 7-12 via Close Up’s Washington High School United South and Eastern Tribes (USET) Program. Full days of exploring the sites and inner workings of the nation’s capital were strategically scheduled to correspond with the annual gathering of top Tribal officials and department heads from 26 Tribes at the USET Impact Week Meeting.

Marsha participated for the sixth consecutive year; twice when the program referred to simply as Close Up allowed younger students. She said her knowledge of Native American and federal government relations becomes deeper every year.

“And every year shows me that USET helps pave the way to better things for our Tribes,” Marsha said.

Held at a hotel in Alexandria, Virginia across the Potomac River from D.C., Close Up sessions focused on a range of topics that included rights and responsibilities of dual citizenship as Tribal members and Americans, federal government structure, Indian policy history and current Indian issues.

Initiatives were illustrated on poster boards during a special Feb. 9 ballroom reception. Seminole students suggested the establishment of an anti-drug youth program that would inspire kids starting in grade six to volunteer within the Tribe that could lead to work-study opportunities and then to careers.

Marsha said students-in-the-know realize that non-motivated youth abuse drugs for fun, which leads to a plethora of social problems.

Eden, who currently interns at Ah-Tah-Thi-Ki Museum under Museum educator Joy Murphy, said he could be a good example of how a work-motivated youth program could help.

“First, it will give kids a look inside many jobs where they will be able to help out and learn that they are important. By the time kids are out of high school, they might be able to be scooped up to work in the departments they like best,” Eden said.

On The Mall in D.C., students toured monuments and museums where stops often included relevant connections to the nation’s indigenous people.

Inside the Capitol Visitor Center’s Emancipation Hall, five statues of Native Americans are among the 14 statues on the first floor that depict historic people from 14 states. At the Martin Luther King Jr. Memorial, activism and social change were discussed. Later, at the Hart Senate Office Building, students sat with Native staffers from the Senate Committee on Indian Affairs.

On the last day of the USET meeting, Marsha, Eden and Cherokee Tribe members Cole Wildcat and Madison Hye Long presented a resolution to the USET board of directors to support education.

The resolution, unanimously passed, calls for USET to poll young Tribal members from seventh grade and up to gauge higher education interests; advocate for more reservation-based college counselors; establish more scholarship programs; build higher education coalitions with other leading Native American organizations, such as the National Congress of American Indians; and extend an invitation to Close Up students to attend the USET 2016 meeting.

USET President Brian Patterson called the students’ participation “a true partnership … creating a spirit that together is stronger and transcending … and one that will be stronger next year.”

Joel M. Frank Sr., who represented the Seminole Tribe on the USET board in the absence of Chairman James E. Billie, said he was impressed with the resolution and advised the students to suggest immediate passage while they are in the presence of USET. Otherwise, the resolution could sit dormant until next year’s meeting.

“Impact Week is so-called because it brings everyone together face to face and one on one. That’s why Tribal chiefs and government officials are in town. We prefer to hear from the leaders rather than read a report. Everyone gets to hear about issues firsthand,” Frank said.