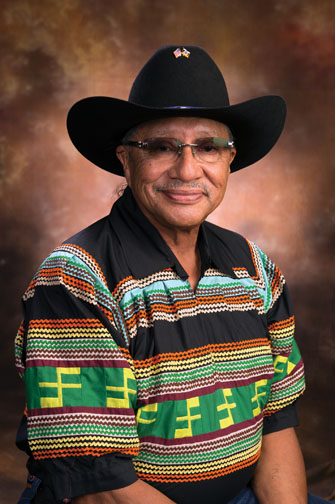 1. Mitchell, has the job of being President changed since the last time you were in that office? In what ways are things different? In what ways is the job the same?

Now we have been moving pretty fast to get all this organized and just maybe we were moving just a little too fast. There’s a right time to move fast and there’s a time to take it slow. But when I came into this office I had a lot of catching up to do. When I was President before it was pretty much cattle we spent a lot of time on. I have to say the last administration did a great job of attracting new business to benefit the Tribe.

It’s the same when you look at being in the office every day. We are still getting together, like the Board has to do, discussing our new projects, reviewing our old projects. But it does seem like there is a lot more going on. It’s more of a “keep you on alert” atmosphere around the Board of Directors. And I believe the Board is responding to that challenge.

2. Can you talk about all the new technology the Tribe uses now? Kronos? Sophisticated accounting systems? Smart phones?

Some areas, it really doesn’t work that well, though. Take the cattle people, the farmers. These people don’t have a regular schedule or anything like an 8 to 5 job. Signing in to Kronos isn’t really for workers in the field. It seems to me it is designed for office people and not for people out in the field. We might have to take a strong look at that and make some changes. I know the Board did not really want to go along with Kronos when it first came up but they went ahead and did like the Council and accepted it.

But I don’t think they looked closely enough at the people in the field. I really think the Board should back out of it and let the Council run it. The Board, what we do is more outside. Now there may be a reason for the way it is set up now, I don’t know, but we will certainly look into it.

3. What is the most important part of your job?

4. You are probably the only Seminole President to have ever written a book, speaking frankly about overcoming diabetes and alcoholism. What are your ideas in dealing, as a tribal government, with tribal youth who have those same problems?

Talking to youth is difficult. A counselor might approach a youth and talk to him or her and the youth will think, “This guy’s not my parent. Who is he to try and tell me how to live my life?” I really believe the parents need to be better educated about how to handle the youth and the serious problems they can run into. The parents need to be educated so they can hand down this wisdom to the youth in the way they learn about everything else from their parents. It’s hard for people other than the parents to pinpoint a young person. We need programs for our kids that start with the parents.

Diet is very important. I found that in my own life. A bad diet is part of alcoholism. Now I don’t see that much drinking anymore. But there appear to be a lot of drugs floating around. Alcohol was the old days when I was young. But it is all the same thing. You got to take care of your body. It’s like a new car. If you take care of it, it runs forever. Same with your body. You abuse it with drugs and alcohol, next thing you know you got diabetes, high blood pressure. The car is broken down.

5. Now that the Seminole Tribe has grown so large, how is it possible to have an “open door” policy where anyone who has a problem can come to your office?

In the past when I was President, and when I was Chairman, I had a few people coming in and letting me know about the problems they were having. I have always had an open door policy for people to come in and ask me what direction they should go. And I tell them, “I can advise you, but you need to make that decision on your own. I can tell you what I did. It might help you decide on your own.”

There is always a right road and a wrong road. A lot of people have the same problems. And each person has their own special problems. We’ll talk with them. We might have to make a schedule, but we will help.

6. Would you rather be in a conference room for hours going over the budget or riding your horse out in your Big Cypress pasture?

Well, that last part sounds real good! But, what can you do? Right now, on the Council, we are reviewing and slicing the budget. It’s part of the job. That’s my first priority. Got to get the tribal government in shape and running properly.

Mitchell Cypress is President of the Seminole Tribe of Florida, Inc.