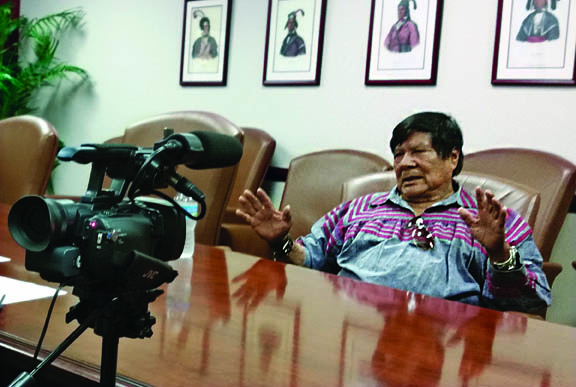 TAMPA — Tribal medicine man Bobby Henry says the famous Florida Seminole Wars leader Osceola did not die of malaria or complications from tonsillitis, quinsy or any other natural sickness, as popular history would have people believe. As Henry knows and trusts, the 34-year-old warrior was murdered by a frustrated United States military officer – shot point blank through the forehead at close range – for refusing to sign a document that promised Florida Indians would leave the state for reservation lands out west.

In a fascinating story Henry said he first heard as a young boy in the 1930s, one repeated to him many times throughout his youth by family uncles and other Tribe elders, Osceola’s murder was covered up with elaborate subterfuge by an embarrassed U.S. military, including a faux dramatization of his pre-death rituals and a curious post-death beheading by the doctor who treated him at the end.

Dr. Frederick Weedon, history says, stole and embalmed Osceola’s head while dozens of soldiers and Indians milled around, prior to putting the body in a casket for burial on the grounds of Fort Moultrie, South Carolina; legend says he brought it to his family home where he put Osceola’s head on his children’s bedpost to scare them when they misbehaved. Later, the head wound up in a New York medical museum where it supposedly burned in a fire.

“Never happened,” Henry said, shaking his head at the incredulity of it all. “I never believed it.”

In an hour-long session Aug. 4 with Ah-Tah-Thi-Ki Museum oral history coordinator Eric Griffis – all recorded on video and audio tape – Henry told his story in English, his second language.

“… my uncle, let’s see, my grandpa, grandpa he just keep, he just keep pushing me. ‘You’ve gotta keep coming back, keep coming back,’ (He’d) tell me same thing. Same thing,” said Henry, whose family traveled throughout Florida in those days, picking fruits and vegetables; he was surprised to hear other elders he met during this time telling the same story that was also kept by his family.

The story begins during “wartime,” Henry said, when talk around the fire told of a Seminole woman, long ago “with a child in her stomach.” The story alleges that the father was non-Indian. Henry paints a haunting picture of the Everglades scene when the pregnancy first was revealed, highlighted by angry shouts and demands that the mother and baby be killed: “This is my enemy; my enemy’s in there,” he said, quoting an angry Seminole elder.

But “medicine people,” as Henry described them, gathered to calm the scene and discuss the situation. Soon, a wartime decision was made allowing the mother to give birth. When the baby boy was born, the mother’s parents took the infant out into the dark woods and left it lying naked on the ground.

Back at the camp, the medicine people were upset, Henry said: “They said we right in the middle in the war and … maybe we raise it and it give it medicine and we take care of it, so maybe it’ll help us leaders in the wartime …” Some were afraid the boy would turn on them. Others felt that if he was raised with medicine, “maybe he go for the Indian people.”

Finally, the child – nearly dead and covered with ant bites, even in his mouth – was retrieved and brought back to the camp where he was administered medicine and recovered.

Cared for by medicine people, the half-breed boy would grow up strong and proficient in Seminole ways, especially medicine. The boy thrown out to the ants and then taken back to the village was Osceola. That’s what Henry said he heard around the fire, many times, as he grew up.

Osceola hung out with other young Seminole leaders like Sam Jones, Wildcat and Billy Bowlegs “and that crew. Osceola, he had been learning with the medicine people and he can do things impossible,” Henry was told, relating a story about Osceola’s escape from a cave by making himself very small and climbing through a tiny hole.

By 1836, Osceola led an effective band of warriors during the Second Seminole War and soon became the face of the Seminole resistance to the United States’ efforts to remove Seminoles from their Florida homelands. In fact, Osceola and his partner Sam Jones (Abiaki) dominated the war resistance until September 1837 when Osceola was captured by deception directed by U.S. General Thomas Jesup, under a flag of truce, when he went to a U.S. fort for peace talks – a black mark on U.S. military history to this day.

Flamboyant, colorful, brash and considered handsome, Osceola, by this time, was likely the most famous American Indian in the world. His exploits on and off the battlefield had been emblazoned on newspapers everywhere.

Though he was charged with the murder of a U.S. agent, Osceola was afforded VIP treatment in the Fort Marion Stockade at St. Augustine and later at the Fort Moultrie Prison on Charleston’s Sullivan Island, where he died in 1838. He was escorted to a stage play (where he was greeted by a standing ovation), allowed to fish, swim and canoe and walk freely around the prison grounds. He was allowed to receive visitors – including his wives – he entertained guests and posed for photographers and portrait painters.

But, as Henry was told, the soldiers fully expected Osceola to sign official papers of Seminole Indian surrender and removal to federal reservation lands out west.

As Henry recounted the story, soldiers and their superior officers soon became frustrated with Osceola’s refusal to sign the papers. And one day, “one of the lower chiefs,” as Henry described him, came into the cell, sat down across a table from Osceola and kept pushing a sheet of paper and a pen toward the warrior, who pushed it back each time.

Finally the officer broke, Henry said, ordering, “All right! One more time!” When Osceola refused, pushing the paper back, the officer pulled out his handgun and without warning, shot Osceola right through the forehead. That’s what happened, according to the stories that began that day among Indians in the area who carried it “on and on and on,” as Henry describes the march of history, south to Florida and Bobby Henry’s fire, somewhere near Ochopee, off the Tamiami Trail, when he was 8 years old.

Osceola was murdered for not selling out his people and using his charm and oratorical skills to persuade them there was a better life out west. “That’s why they killed him,” said Henry, shaking his head. “And a lot of story about (Osceola) I don’t believe. You know, he grow sick and die and the doctor (cut off) his head and he scared his kids or something like that.

“I think I know something, the old people tell me, so it never changed my mind, you know, but that’s what I know … where was his head? OK, you got it, bring it back, house burned. House burned down?” Henry smiled at the incredulity of it all – the only physical evidence demanded by any investigator of the story, the head with the bullet hole, missing all these years.

“It does make sense and it really can’t be discounted. It’s certainly not the ‘accepted’ version of Osceola’s death but … well, coming from a man like Bobby Henry gives the story a lot of credence. I know Bobby Henry and he tells the truth. I believe he is telling the same story that has been handed down through his family,” West said.

The story does not carry the name of the officer who shot Osceola, said Henry, who says all he heard is the soldier was a “third chief” down from the top who had bragged he could make Osceola cooperate when his superiors had failed: “I don’t read or write. I never went to school,” Henry said. “All I know is from talk. From my uncles and my grandpa. All my life the story same.”

At the time of Osceola’s death on Jan. 30, 1838, “he was one of the most well-known American Indians in the world,” West said. While there is no proof that Weedon and his associates participated in a government conspiracy to keep the impulsive murder of a beloved world figure secret (and thereby quell the enormous negative public reaction), it is “food for thought,” she said. “Killing Indians like that, even cutting off heads and scalps were not that uncommon among our military in those days.”

Legend says the head spent time on display on Weedon’s St. Augustine pharmacy counter and at his home, then was given to Weedon’s son-in-law, Daniel Whitehurst, who in turn sent it to Valentine Mott, a famed New York surgeon, in 1843; Mott placed Osceola’s head in his Surgical and Pathological Museum and later sent it to be displayed at the Medical College of New York, where Osceola’s head disappeared in an 1865 fire that destroyed the museum.

“I don’t believe it,” Henry said steadfastly. “Not what I was told. They killed him.”

It is remarkable that such an artifact as a preserved head of the world’s most famous Indian would spend 27 years on display, in several different venues, yet there is no known photograph to document its existence. In Patricia Wickman’s book “Osceola’s Legacy,” among an impressive array of Osceola images, not one photo of the embalmed head is found.

“That head means a lot more to us today than it meant to people way back then,” Wickman said. “I interviewed all the members of Weedon’s family, anyone who came into contact with that head, and there is no photo.”

Wickman, however, does not doubt Henry’s personal veracity: “I know Bobby Henry very well. He does not lie. Bobby’s not a man who tells tall tales. I’m certainly willing to believe that story has circulated among the Seminole Tribe over the years, born from the fear of the atrocious events that occurred to Seminoles in those days. However, there is absolutely no evidence to support that conclusion (that Osceola was shot to death). On the other hand, there is copious evidence to support that he died otherwise.”

In “Osceola’s Legacy,” Wickman lays out a well-researched chain of evidence pointing to the warrior’s natural death from complications due to tonsillitis, exacerbated, the author wrote, by a severe head lice infection.

Henry hopes young people will take the time to hear his story when it is installed in the Ah-Tah-Thi-Ki oral history archives. It is part of his life’s quest to bring back the culture he feels is being lost with each generation.

“I thought I want to share (the story) with people, that way I want to see your son, his son, his daughter, they should learn something with the language,” Henry said.