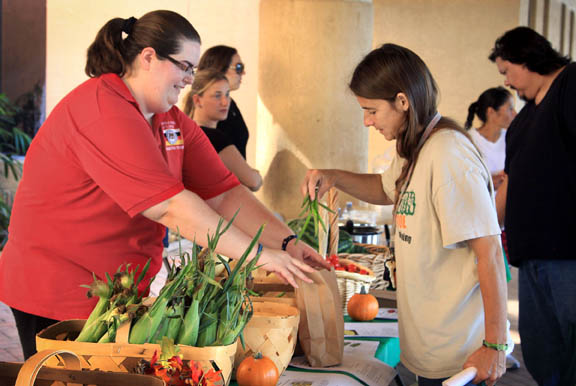 For several years, the market has provided Tribal and non-Tribal members with exposure to fresh foods while encouraging positive habits.

“We have this event during Diabetes Awareness Month because it’s a great time to let people know the importance of eating healthy,” said Edna McDuffie, community outreach coordinator. “We’re making sure people know what’s going on.”

President Ronald Reagan signed a proclamation on Nov. 3, 1983 making November National Diabetes Month. In it, he expressed his desire for people to “observe this month with appropriate programs, ceremonies and activities.” Since then, organizations throughout the world have used November as a platform to educate people on the severity of diabetes.

According to the Centers for Disease Control and Prevention’s (CDC) age-adjusted statistics from 2010-12, diabetes affected 15.9 percent of Native Americans, the highest percentage among all races.

The CDC lists diabetes as the seventh-leading cause of death in the United States. Complications with diabetes can lead to blindness, amputations and kidney problems. There are two main types of diabetes: type 1 and type 2. A third, gestational diabetes, can flare up during pregnancy. Type 2 diabetes accounts for 90 percent of all diabetes cases. Obesity, hypertension and inactive lifestyles can cause diabetes.

More than 50 people, including community residents and employees, attended the market in front of the Frank Billie Field Office. Harvest-themed tables were decorated with green cloths, softball-sized pumpkins and brown and orange leaves.

Baskets overflowed with corn, green beans, bananas, tomatoes, mini watermelons and three types of squash (butternut, summer and spaghetti). Fruits and vegetables stabilize blood sugar and are high in fiber. Brochures and information sheets about diabetes were available for people when they signed in.

Recipes such as roasted butternut squash and green beans with lemon and garlic challenged the myths that healthy foods cannot appease everyone’s tastes. Additional recipes and explanations of the foods’ benefits were available on tables. A white chicken chili, cooked at the market, received good reviews.

“We try to encourage people to do more cooking. You don’t have to have diabetes to benefit,” Davis said.

The 3 sisters (squash, beans and corn) are vegetables that have been planted together for centuries through intercropping. The plants’ roots and growth become intertwined, creating a more nurturing environment for the plants. The cornstalk provides stability for the beans and squash to grow on. The beans replenish the nitrogen the corn uses, which is essential for plant growth. And the leaves from the squash protect all of the sisters from rodents and other things that can be harmful to them.

The market is not the only event that takes place on reservations to promote healthy living. Other events, such as 5K runs, Rez Rally and Pathways programs, offer individuals additional opportunities to get healthy throughout the year.

Davis said that past participants have mentioned they sleep and eat better as a result of the farmers market. Also, there have been less health-related trips to the emergency room.

“It’s good because in the long run we can make healthy foods for other Tribal members,” said Big Cypress resident Regina Cypress.

Maverick Osceola, of Big Cypress, said, “I hope they keep doing stuff like this all the time.”

Through proper diet, exercise, insulin therapy and medications, diabetes can be treated.

“We talk to people. Making these changes will help them with their health,” Davis said. “We try to catch them early. Change has to come from inside.”