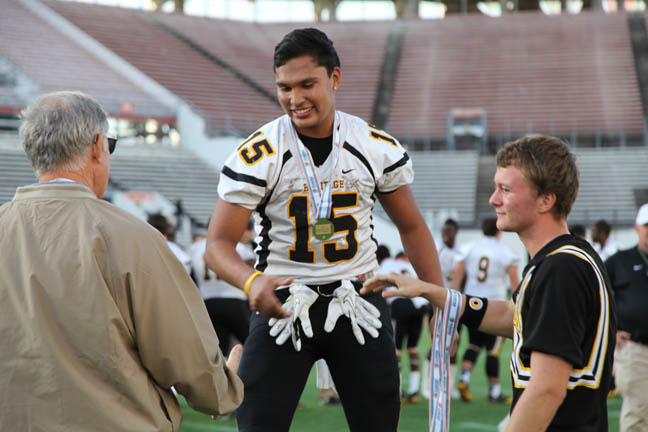 ORLANDO — Andre Jumper admits he was surprised at the Citrus Bowl Dec. 13.

“I knew we were going to win. We worked really hard to get to this game,” said the American Heritage School defensive end, after he and his teammates pulverized shell-shocked Clay High School, 66-8, in the 5A high school state football championship. “But I never would have believed 66-8. I knew we were No. 1, but they were No. 2. I would have thought it would be a lot closer.”

But, with 10 touchdowns and a whopping 697 all-purpose yards, state champs American Heritage, of Plantation, showed why it ended the regular season ranked No. 4 among all Florida gridiron teams, No. 61 nationally and the only Broward County team to make the state finals this year.

During the playoffs, the Patriots beat their five opponents by a combined score of 255-78 – scoring 41 points or more in every game.

Jumper was a starter all year for the Patriots, who won their last 13 games to finish 14-1. Against the Clay Blue Devils, from Green Cove Springs, Jumper led all defensive players with seven tackles, six assisted tackles and a fumble recovery, completely dominating the left side of the field, where the 6-foot, 180-pound junior lined up as defensive end.

In fact, Clay’s only score, a 35-yard run by quarterback Wes Weeks (followed by a successful two-point conversion), came with less than five minutes left in the game while Jumper was on the bench. Ironically, fans for both teams cheered when Weeks scored, diminishing the possibility of the game being the most lopsided in Florida High School Activities Association (FHSAA) championship game history. Midway through the fourth quarter, referees ordered the game clock to run, without stopping for incomplete passes or out-of-bounds plays, to minimize the rout.

Though the game was televised statewide, some 20 Tribal members made the trip to Orlando, including grandfathers Moses Jumper and Jonah Cypress and their immediate families.

After the game, Andre left a raucous post-game, on-field celebration to jump into the stands to hug and pose for photos with each group.

“I’ll tell you what; he’s pretty good. And he’s growing. He’s only a junior, so we are really looking forward to next year,” said proud grandpa Moses Jumper.

A scholarship to a Division I school may be in the future for Andre, Moses Jumper said, who added he’s not worried about concussions and other injuries, despite so much news attention given the subject this year.

“This boy has been raised around rodeo,” he said. “Rodeo cowboys don’t worry about that stuff.”