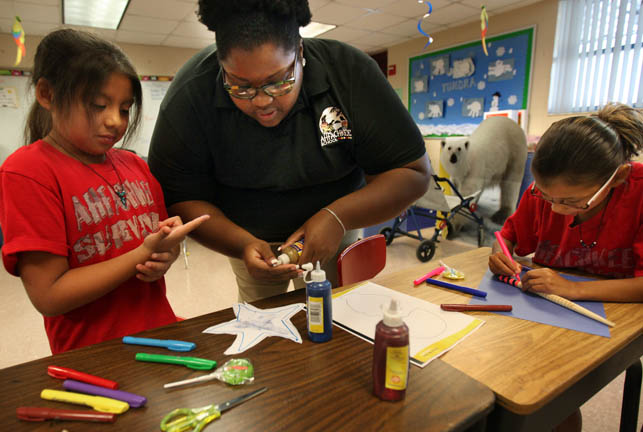 “They have fun learning every day,” teacher Billie McDonald said during a tour of classrooms where children absorbed knowledge and enjoyed the experience July 9.

Based on the reality television series “Survivor,” the program allowed kids to explore a different world biome – or climate environment – each week. The tundra, desert, ocean and rainforest were visited via entertainment, arts and crafts, reading, math and science.

During ocean week, second- and third-graders met sea creatures through the book “Deep Sea Dive” by Salina Yoon. Sea eels, though dangerous in the deep blue sea, were not scary at all when the class decorated toy sea eels using bright-colored Magic Markers.

“But if you touch a real sea eel it will zap you – so don’t,” Peggy Sue Cypress said.

Teacher Cynthia Wilkes said students had already spent almost an hour solving math problems, including two-digit addition and subtraction. They also used computers to research and read about other marine life on the Internet.

Across campus, middle school students relaxed on beanbag chairs in a room where fish, crustaceans, seaweed and fishing net hung from the ceiling. They were captivated by the BBC documentary “One Life” that depicted the interconnectivity of Earth’s biomes.

Incoming sixth-grader Brandi Osceola said the documentary inspired her to someday visit Madagascar, an island country off the coast of Africa that is considered a biodiversity hotspot of the world.

“I want to see monkeys break open nuts with rocks like in the movie,” Brandi said.

But first, ocean week was capped with a summer school trip to Miami Seaquarium.

Brandi said the best part of summer school was learning with friends and having fun with teacher Yesenia Gaviria. Earlier in the day, Gaviria instructed students to read the novel “Eagle Feather” out loud to each other in pairs.

The final week gave students a chance to discover the rainforest and end summer school in a shower of laughs. Kids were treated to a field day on the school campus with everything wet, including a massive water slide.