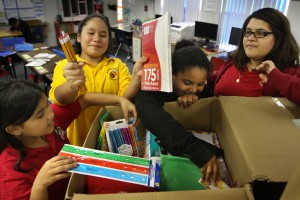 BIG CYPRESS — Liberty Robbins, 9, said she couldn’t imagine if a hurricane swept through her school and destroyed everything in sight, but she knows how she’d feel if someone came to help.

From November through mid-December, the entire fourth-grade class led by teacher Catalina Bedoya opened their hearts to help schools in New York and New Jersey that were devastated by Hurricane Sandy. They led a drive to gather and send much-needed classroom supplies for students who lost it all on Oct. 29 from the storm’s brutal wind and rain.

According to published reports, nearly 200 of 1,400 schools in New York and neighboring districts were damaged beyond operation. In New Jersey, many schools were rendered unusable and shut down for the unforeseen future.

“We always have to put ourselves in the shoes of others, understand what they are going through and then pay it forward,” Bedoya said. “We have been fortunate, so it was our time to help.”

Bedoya said she heard on the radio that other schools outside Hurricane Sandy’s reach were already collecting non-perishable food, blankets and clothing. When Bedoya learned that up to six New York and New Jersey schools at a time were sharing facilities just so children could return to class, she decided that school supplies would be the next priority.

“It didn’t matter what we gave,” Charlie said. “Whatever we gave they needed for learning.”

Four large boxes were shipped to the Staten Island Hurricane Relief Fund and two were sent to Project Backpack in New Jersey.

Bedoya said the drive kicked off with a challenge – a cupcake party or a pizza party would go to the two classes with the most donations.

But no one knows who really gave the most. A box staged in the school’s front office was started with a few pencils but almost overnight became heavy with goods dropped off by an anonymous donor – or maybe a group of several people.

“It was a beautiful thing and perfect to show the holiday spirit of charity,” Bedoya said. “It was like having a secret Santa.”