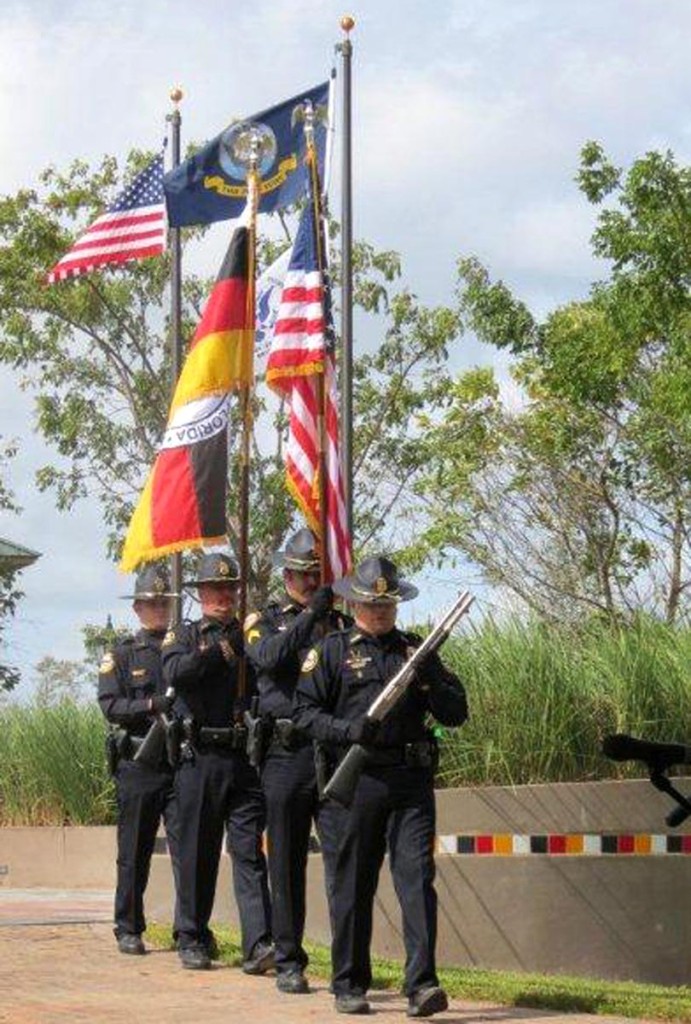 BIG CYPRESS — Gathered at the memorial wall on the Big Cypress Reservation, Ahfachkee School students, teachers and staff paid homage Nov. 6 to Tribal members and employees who served or currently serve in the U.S. military.

Ahfachkee senior Quenton Cypress emceed the grand assembly that was created, hosted and led by Ahfachkee students and also included a musical tribute.

Fittingly, Mary Jene Koenes, aunt of Army reservist Staff Sgt. Gabriel Coppedge, offered an opening prayer to thank veterans for their service and asked the Creator to protect those currently in harm’s way. Her nephew served in the Army infantry for a 2006-2007 tour in Afghanistan and a 2007-2008 stint in Iraq and was on hand for the festivities. He was later the guest speaker at the Veterans Day commemoration in Brighton.

Quenton said he was humbled to have Coppedge participate.

“It’s pretty cool to have him here. He is a hero and he should be honored,” Quenton said.

All the veterans received the hero treatment.

“We want to make all of them feel special. And we shouldn’t just do it on Veterans Day but every day,” Quenton said.

Fourth-grade students Jordan Osceola and Ramona Jimmie led the Pledge of Allegiance. Musical tributes included This Land is Your Land sung by children in first through third grades and a rousing rendition of Home of the Brave by fourth through sixth grades.

The youngest students provided a sweet version of Oh Veterans.

Eighth-grader Dayra Koenes, a niece of Coppedge, read a loving essay about what the memorial wall means to her.

“We have the wall for all people in the Tribe who went to war for our native rights. To us, they are all family members because they went to war for the future of our Tribe,” Dayra said.

After the tribute, principal Lucy Dafoe played Taps on the trumpet for troops who did not make it home.

For Dayra, seeing her uncle dressed in his military uniform for the first time in six years was jarring.

She worries about Coppedge’s potential return to war.

Quenton said he felt overwhelming gratitude for Native Americans who serve in the military.

“They not only protect our land but our people,” he said. “It shows that we are still here to fight and that we never lost our warrior pride.”